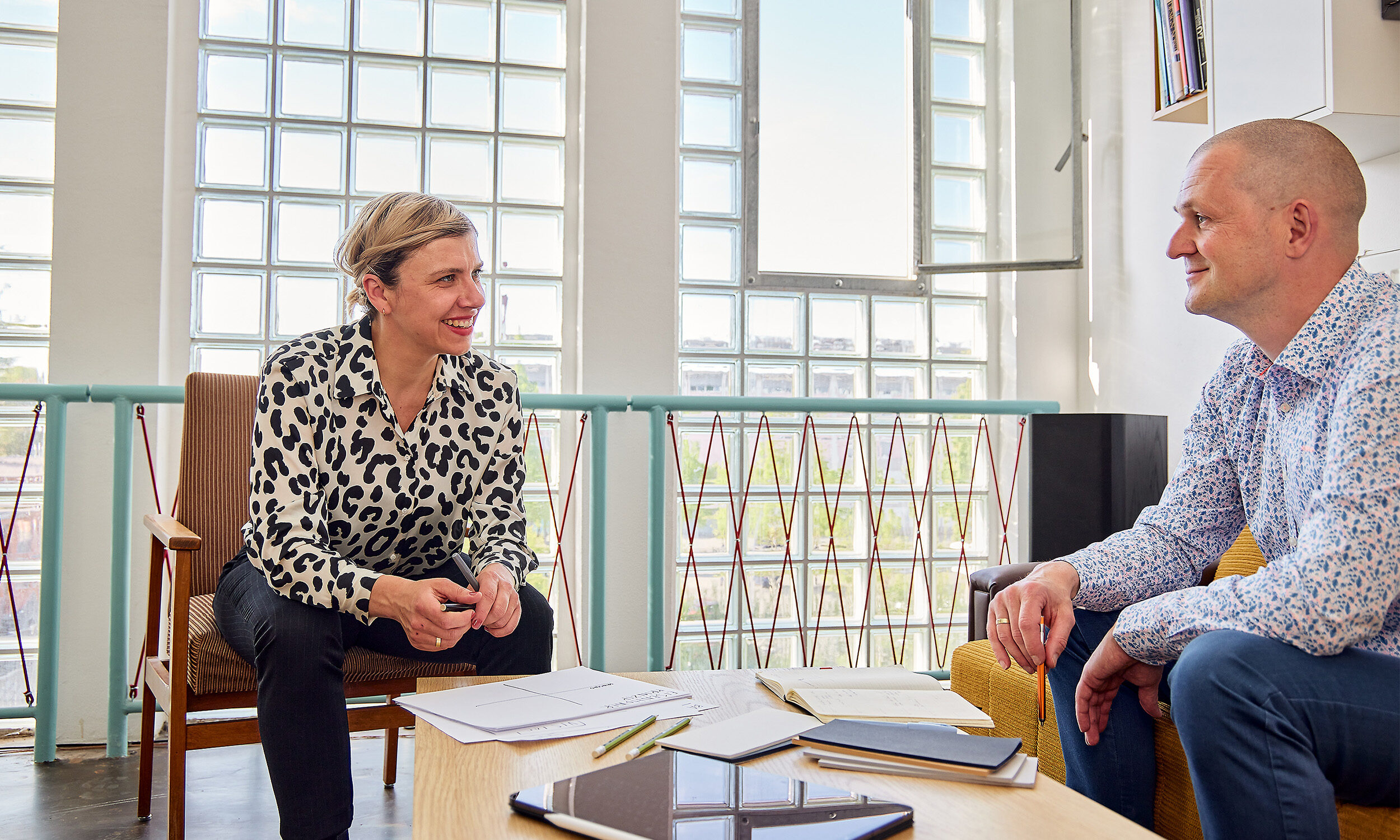 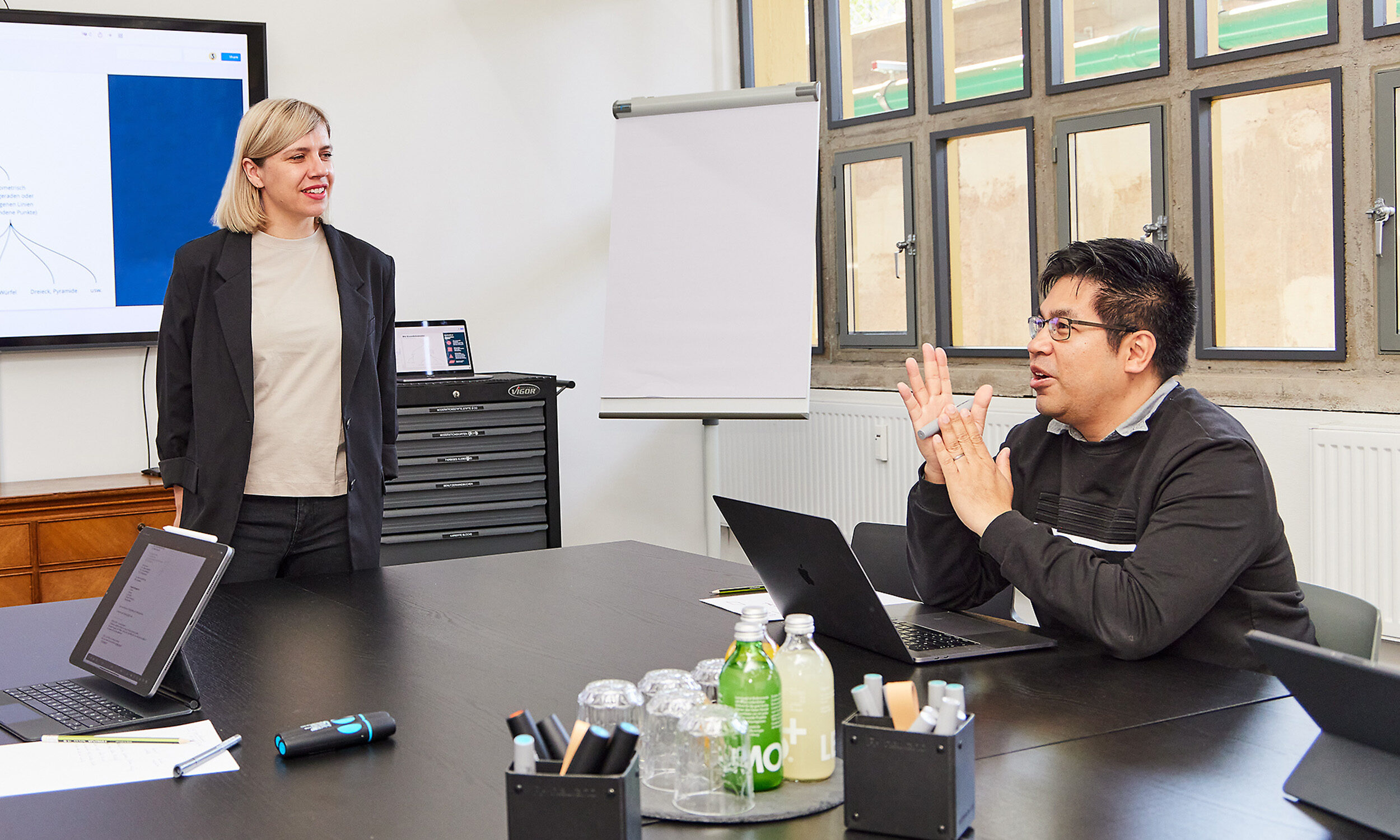 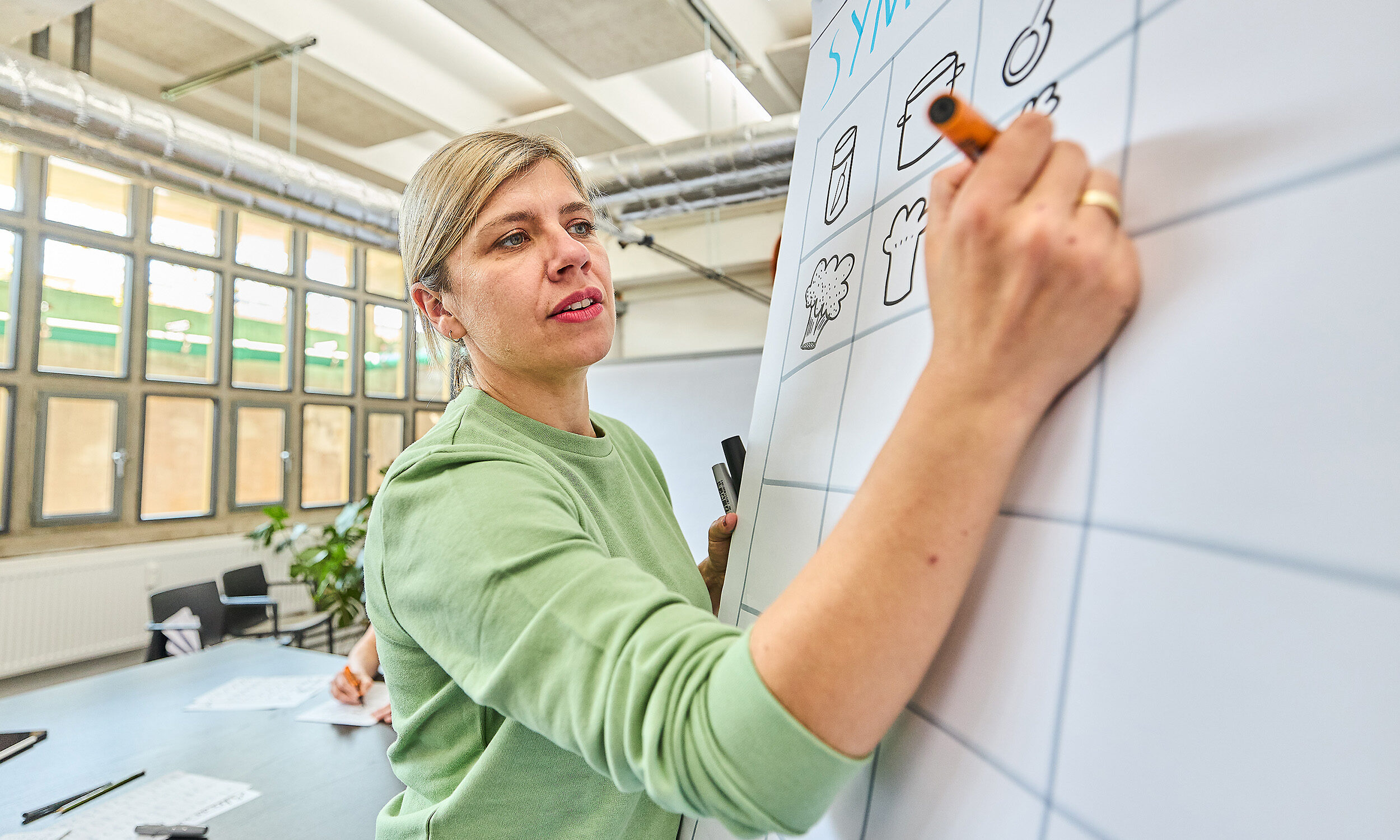 Knowledge is the only resource which multiplies when it is shared. Therefore, we pass on our experience and know-how through training programmes and workshops, as well as lectures . You can book commonly requested formats directly through our shop. We also enjoy devising new, individualised content which is matched to your needs and your motivations.

In addition, we also offer one-on-one coaching and facilitation, because visual thinking does not only produce pretty pictures, it also produces insight. With our support, you will gain a crystal-clear view of business and strategic questions.

Sandra Bach, founder and managing director of sandruschka, lives in Weimar. The qualified communications designer feels equally at home in both illustration and animation, and has worked for various companies, foundations, NGOs and for children’s television (Kika, ZDF). In addition,  she is a certified moderator (Neuland Partners), an in-demand coach for topics on the cutting edge of creativity, strategy and innovation, and a passionate entrepreneur.

Positions: 2002–2008: Studied communications design in Halle (Saale) with a focus on illustration and animation | 2005–2006: Lucerne School of Art and Design | 2006-2008: Character designer with Motion Works Halle | 2008–2010 Graphic designer at “Neues Theater” (New Theatre) Halle (Saale) | 2009–2011: Illustrator and graphic designer with Atelier Papenfuss Weimar | since 2011: independent; founder of sandruschka. Room for Design in Weimar | since 2013: Specialisation into graphic recording, moderation and training | since 2019: voluntary work in the EVP Community (European Visual Practitioners) | since 2021: Lecturer for digital-visual teaching methods, University of Erfurt

We give processes structure

While we work with individual personalities in our 1:1 coaching sessions, the focus of moderation is on the group – ideally a multidisciplinary professional team with representatives from different departments.

After our initial workshop, which we strategically and meticulously prepare, smaller groups are formed for further work. We supply them with all of the digital and analogue tools they need to fulfil their tasks. We document this agile process with graphics. This facilitates communication with stakeholders, sponsors and partners, who you want to win over.

And there is no better team building exercise than treading new paths and to creatively overcome challenges together.

We develop your vague ideas into coherent concepts

Companies, NGOs and many other societal parties find themselves in the same predicament. How is it possible to reach out to as many people as possible – despite the target group continuously differentiating and splitting off into ever smaller communities? Our answer to this question is with holistic communication that does not leave anyone out.

As an experienced trainer and moderator, Sandra Bach finds creative answers to your questions. She listens, asks questions, structures and visualises. Working with you, she creates concepts, stories and pictures that bring your ideas together. This is achieved with personal meetings, as well as online with the help of digital tools.

All 1:1 coachings are committed to the philosophy of design thinking – the human being is the focus of all considerations.

A one-on-one coaching session can help you to …

We pass on our knowledge
Visualisation- and moderation methods are in demand like never before. Whether it’s convincingly passing on content, structuring discussions or documenting processes: with the practical knowledge gained from our workshops your messages won’t be confused by language or cultural barriers.

We enable your team to anchor the concept of visual thinking into their everyday working routine or for them to create their own documents using a corporate design drafted by us – this will breathe life into your brand.

All offers are suited for both beginners and experienced workers, they can take place either on site with you or in our office in Weimar. It can be one on one or in a group. We are happy to adapt the contents and communications techniques to your preferences.

Do you wish for intensive, individualised supervision? Then book one on one coaching with Sandra Bach.

We offer training sessions and workshops for:

Sandra Bach shows how it’s done. In just a few years, she built a creative, design business with five employees and clients throughout the whole of the German-speaking realm – whilst also establishing herself as a designer, entrepreneur and coach. The knowledge accumulated on this journey is too valuable to keep to herself.  This is why we look forward to requests for lectures or educational work on the topics of creativity, innovation and entrepreneurship.

A selection of commonly requested themes are:

Design:
Here we devote ourselves to the fundamentals of design and layout principles. What are the ground rules for simple corporate design and how do I get there? How can I utilise simple and good design to create talks, presentations or scientific posters, so that others can understand the content?

The contents can be tailored to your individual interests.

Every successful visualisation is based on a conclusive strategy.

As a result, more and more customers take us on board when the realisation of a project is on the agenda: as an extra “thinker” and consultant for conceptual questions.

Over the last years we have acquired a stock of knowledge and experience that could give your idea the crucial development boost – or at least a solid foundation for making the right decision.

Our expertise extends over the following areas:

A focus point of the team’s advisory activity around CEO Sandra Bach is the development of creative and inclusive formats. We are open-minded “Early Adopters” of new tools and media and have been working consistently on the web for many years.

Therefore, we know from our own experience how efficient knowledge work and communication functions in a digital space, what technical requirements have to be met and how to build proximity to your target group.